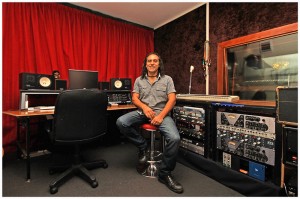 COME AND MIX IT UP AT THE AUDIOBUNKER.

Music recording has come a long way in the 30 years since Audio Bunker founder, Eddie Parise, started playing with his beloved TEAC 3340s 4 track recorder. Technology may have changed since then, but this early, raw experience is an essential element of what makes the Audio Bunker such a great recording studio.
To hit the right notes, Eddie knows you need a relaxed and friendly atmosphere, where you can feel comfortable and confident… along with the production skills and expertise to ensure the sounds you make are the ones you want to hear.

INSPIRED BY THE BEST.

Eddie’s love for the bass guitar has taken him all around the world, and his passion for music has seen him record in some of the most famous studios on the planet.
Synthesized music slammed into the 1980’s, and so did the “Midi Bass” guitar. Known for his skills on this incredible instrument, Eddie was approached by Steve Chick Research – leaders in midi-bass guitar design – and asked to do international demonstrations… both to potential manufacturers around the world and bass players in high profile bands across the USA and UK.
His expertise then caught the eye of TM Stevens, who invited Eddie to the famous Hit Factory sound studios in New York. In his time at The Hit Factory – with Charlie Midnight producing for Joe Cocker – Eddie was pivotal in helping produce a modern sound with the Midi Bass.
While in Los Angeles Eddie was privileged to play part in a session with Grammy award winning producer David Kershenbaum, who has produced for renowned artists like Cat Stevens and Tracey Chapman.

THE BABY ANIMALS – Australian rock personified.
Eddie helped form the multi ARIA award winning rock band The Baby Animals, the result of a journey which began cutting demos at home using whatever he could get his hands on in order to complete a track – portastudio, 1” 3M tape machine, TEAC 4 track, you name it.
When Eddie met Kevin “Caveman” Shirley, famous record producer for bands like Iron Maiden and Led Zeppelin, he asked him to help record a demo for The Baby Animals… it was the start of a fantastic working relationship, which saw them score a recording deal in the USA, working with Mike Chapman sitting in the producers chair(famous for his work with Suzi Quatro, Blondie and Pat Benetar among others).
The band’s 1991 debut album ‘Baby Animals’ spent six weeks at No.1, and became the highest selling debut album of that time, winning 5 ARIA nominations and 3 awards – their first taste of success. They went onto tour Europe and the USA with artists such as Bryan Adams, Van Halen, Paul Rodgers and Robert Plant… producing their second studio album ‘Shaved and Dangerous’ with Ed Stasium (of The Ramones and Living Colour fame). They recorded in Bearsville Sound Studios (just west of Woodstock, New York), and also at Compass Point Studios in the Bahamas (following in the footsteps of icons like Bob Marley, The Rolling Stones, Eric Clapton and AC/DC).

WITH REAL-WORLD EXPERTISE, COMES A REALLY GOOD RECORDING EXPERIENCE.
The point of telling you all this is simple; Eddie knows his stuff. By choosing The Audio Bunker you’re benefiting from three decades of front-line Australian music industry experience. And you’ll be talking to a producer who understands how to nurture your project properly from demo stage, right through to a finished product.

The Audio Bunker’s philosophy is about making great music… at great rates that tomorrow’s big bands can afford today. Our services and terms are tailor made to your budget, ensuring you’ll find a cost-effective way to experiment, grow, make the big time jump, or simply just enjoy an awesome recording experience.